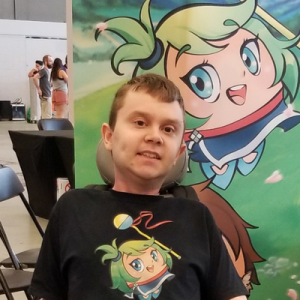 « Not letting my condition stop me from achieving my dreams.»

Frederic McNamara is a lifelong video game enthusiast who decided to enter the industry after graduating. He founded  Shishi Studios, an independent studio that aims to make a difference by creating ambitious games that innovate by experimenting with new visual styles and game genres, while being accessible to all. The studio released its first game for the Switch, Timeless Prelude,, at the end of May, and the demo of its next game is available on Steam: Ballad of the Oracle.

With muscular dystrophy, a group of over 160 different neuromuscular diseases characterized by a progressive deterioration of muscle strength, Frederic has been very active in his community from a young age, having helped organize the Dystromarche for several years. He says he wants to “push awareness initiatives like this in the industry to raise awareness, raise funds as well as reach out to younger people.”

Produce games accessible to everyone

Ballad of the Oracle, the next project from Shishi Studios, is a role-playing adventure game set in a colorful world filled with cute creatures. Players take on the role of an Oracle named Elia, who must develop self-confidence through empathy, determination, passion, and wisdom in order to awaken the power within her. From an accessibility point of view, Frédéric explains that “the game is simple to play so that everyone can have a similar experience. It was also important to add different gameplay customization modes such as the ability to change the game controls, a customizable game interface, and contrast options for people who are color blind and visually impaired.”

Frédéric would like to push accessibility even further, but he faces certain challenges that independent studios face, such as the small size of production teams and the costs associated with the various phases of game development.

It is up to employers to adapt their work environment to make the workplace accessible – not only there but also to get there – and he recommends flexible work hours as some people require recurrent care that prevents them from being able to work during conventional hours. He adds, “It’s important to provide accommodations such as accessible bathrooms as well as modular offices for wheelchairs because they are all different and conventional offices unfortunately don’t always fit.” In addition, he advises companies to offer services such as the placement of attendants on the premises to facilitate the daily lives of people with disabilities.