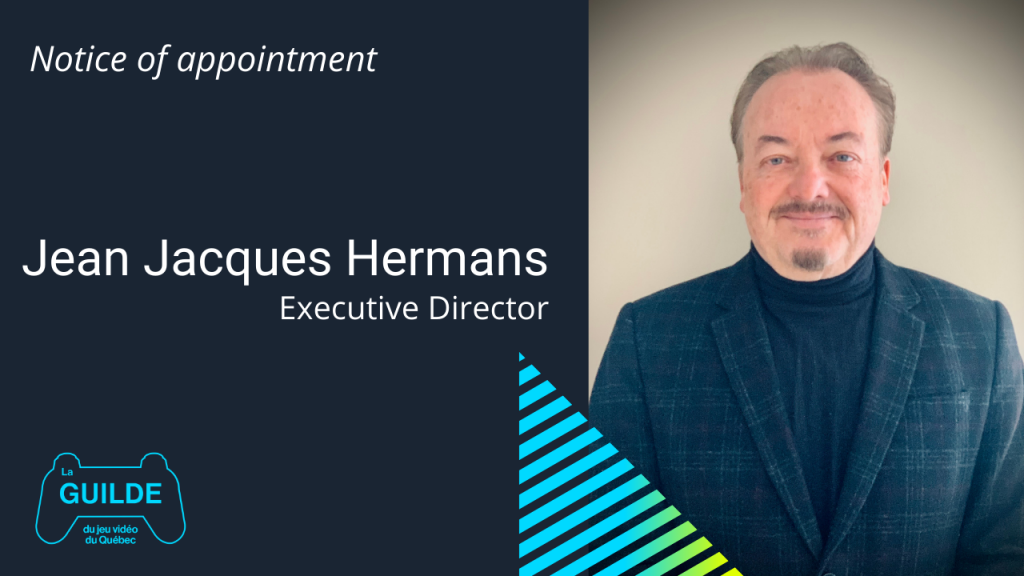 Jean Jacques has nearly 20 years of management and organizational development experience in the private and NPO sectors, including most recently with the Canadian Chamber of Commerce where, as Senior Vice President, Corporate Relations and Services, he led the development of numerous strategic partnerships and key business lines.

Mr. Hermans previously held various management roles in the software sector at Softimage, Microsoft and Kaydara, where he contributed to the development of audio-video and animation software solutions.

Christopher Chancey, La Guilde’s Chairman of the Board, said “Jean Jacques’ appointment as La Guilde’s Executive Director follows a rigorous process during which he demonstrated the relevance of his extensive experience in strategic and business development, management, marketing and corporate relations. We are pleased with this appointment, which will contribute to the growth of Quebec’s video game industry, a growing ecosystem that has shown great resilience during the pandemic.”

“I thank the Board of Directors for their confidence. It is with great pleasure and humility that I join La Guilde’s team and the vibrant Quebec video game ecosystem. La Guilde is the proud representative of an innovative and creative sector, with its 270 member studios, partners, research and educational institutions and other related businesses. I am taking on this mandate with the desire to contribute to the growth and development of the organization and the industry,” added Jean Jacques Hermans.

La Guilde’s team joins the Board of Directors in welcoming Jean Jacques. He will be able to count on the presence and expertise of Nadine Gelly, who has been the organization’s executive director since December 2019, to orchestrate a smooth transition in the coming weeks.

About La Guilde du jeu vidéo du Québec
La Guide du jeu vidéo du Québec is a non-profit organization that brings together independent and international video game developers, creators, educational institutions and entrepreneurs in related fields based in Quebec. La Guilde is the world’s leading video game industry association with 270 members and is the largest of its kind in the world.

La Guilde is a non-profit organization that brings together independent and international video game developers, creators, educational institutions and entrepreneurs in related fields based in Quebec. Its vision is to cultivate fertile ground for the industry in order to maintain and strengthen Québec’s status as a world leader in the video game sector through the collaboration of its players. La Guilde is a world leader in this sector and, with 245 members, is the largest group of its kind in the world.