MICHEL BLANCHET: ADVOCATING FOR THE CAUSE OF AUTISTIC PEOPLE 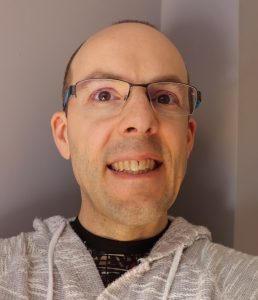 “Let’s implement some simple tools that would make it easier to integrate people with autism into the workplace.”

For Michel Blanchet, diversity in the workplace is above all not a matter of quotas and percentages. Rather, it should be measured by integration and adaptation initiatives, especially for people with autism.

On a daily basis, Michel Blanchet is not satisfied with being a developer for the Montreal studio Ludia, a position he has held for nearly six years. He is also on a mission to change the way autism is accepted by his employer, the Quebec video game industry and even the working world in general. On this subject, it should be noted that according to some studies, barely one autistic person in four has a job in Quebec. As a person with autism himself, he has been advocating for a long time that workplaces be adjusted to optimize the performance of autistic employees. And it starts with the hiring process, he says.

“In interviews, we are asked general or abstract questions such as ‘Where do you see yourself in five years’ or ‘What is your worst and best trait’. For an autistic person, such questions are too broad. As a result, candidates get lost in them and do not particularly stand out. On the other hand, if you put them in situations they might encounter at work, they will definitely demonstrate vision or even propose a solution to the issue raised. ”

Similarly, at the hiring stage, clichés such as “We’re looking for a team player” don’t mean much to people with autism, says the man who has been working in technology for 20 years. However, “Participate as a team in solving problems” is a much clearer and more understandable formulation.

Useful Qualities in the Gaming World
Michel Blanchet speaks knowingly because he experienced a slump after losing his analyst position at Teleglobe when it was outsourced to India. “I was fully qualified for the jobs I was applying for,” he recalls. Still, I didn’t get past the interview stage because I hadn’t had any opportunity to showcase myself there. ” Showing off in the case of an autistic person is, for example, demonstrating the attention to detail that characterizes people with such a profile. ‘People with autism are great at making sure that the functionality of a game, site or application is bug-free,’ he explains. It is that they focus on aspects that are very often missed by most people. ” In 2009, Laurent Mottron, professor in the Department of Psychiatry at the Faculty of Medicine at the University of Montreal, made a major discovery in this area. He has shown that people with autism focus their brain resources more on visual processing and less on tasks like planning. As a direct consequence, they are up to 40% faster at problem solving.

Quotas: A Pipe Dream
That being said, Michel Blanchet believes it would be a mistake to hire autistic people only for this purpose. “Let’s avoid stigmatization, ”he says about it. Instead, he suggests that employers put in place simple tools that would facilitate integration into the workplace. “For example, why not make a resource person other than their supervisor available to autistic people upon their arrival in a new organization. This person could answer their questions in the highly stressful context of a new job. This could even be applied for any hiring, as it has been shown that peer-coaching a new employee always yields positive results. ” For him, such measures are much more promising than the quotas and statistics that companies often brandish in order to demonstrate their openness to diversity. “Numbers are a quick and easy way to look good,” he says. In return, adaptation initiatives are less mathematical and less profitable politically, but they do bear fruit.“

First Step Towards Tangible Measures
To convince decision makers, Michel Blanchet has been offering them an awareness-raising activity in the form of a conference for several years. Around research, factual data and statistics, he deconstructs some myths while suggesting ways to facilitate the hiring and retention of people like him. More importantly, he talks about mechanisms to make working life better suited to the reality of people with attention deficit disorders. ‘Eventually, I would like to play a consultancy role to facilitate the integration of artists and other groups into the workplace,’ he says. I have already noticed a great openness in companies and in the business world in general. However, this willingness does not always translate into concrete action and in-depth understanding. I believe that with my experience and knowledge of this field, I could make a difference.” The observer nevertheless salutes Ludia and the Quebec video game industry, both of which he considers ahead of the curve in terms of changing attitudes. “However,” he says, “I have noticed in recent years advances in occupational health and safety even in a conservative sector like banking. It’s very encouraging, but there is still a lot to be done, and I intend to participate. ”